Physiology – The Lactate Threshold
By Stephen Sieler
From MAPP http://home.hia.no/~stephens/
---------------
In exercise physiology, there have been few topics more frequently investigated, or more vigorously debated than the lactate threshold. It is the details, not the basics that create the big research problems. However, it is the basics that have great application to training and performance. So, we'll stick to those.

What is Lactic Acid and Where Does it Come From?
When you consume carbohydrate, it consists of several different sugar molecules; sucrose, fructose, glucose to name a few. However, by the time the liver does it's job, all of this sugar is converted to glucose which can be taken up by all cells. Muscle fibers take up glucose and either use it immediately, or store it in the form of long glucose chains called glycogen. During exercise, glycogen is broken down to glucose which then goes through a sequence of enzymatic reactions that do not require oxygen to proceed. All of these reactions occur out in the cell fluid, or cytosol. They can occur very rapidly and yield some ATP in the process. This pathway is called the anaerobic (no oxygen) glycolysis (glucose breakdown) pathway. Every single glucose molecule must go through this sequence of reactions for useful energy to be withdrawn and converted to ATP, the energy molecule, that fuels muscle contraction, and all other cellular energy dependant functions.

The Metabolic Fork in the Road
There is a critical metabolic fork in the road at the end of this chemical pathway. At this fork, glucose has been converted from one 6 carbon molecule to two, 3 carbon molecules called pyruvic acid, or pyruvate. This pyruvate can either be shuttled into the mitochondria via the enzyme pyruvate dehydrogenase, or be converted to lactic acid via the enzyme lactate dehydrogenase. Entry into the mitochondria exposes the pyruvate to further enzymatic breakdown, oxidation, and a high ATP yield per glucose. Conversion to lactate means a temporary dead end in the energy yielding process, and the potential for contractile fatigue due to decreasing cellular pH if lactic acid accumulation proceeds unchecked. Like a leaf floating in a river, the pyruvate molecule has no "say" in which metabolic direction is taken.

Which Way will MY pyruvate go during exercise?
I am sure you have surmised that that is a critical question with big implications for performance. I will try to answer the question at three levels: a single muscle fiber, an entire muscle that is active during exercise, and the entire exercising body.

The Muscle Cell at Work
In a single contracting muscle fiber. The frequency and duration of contractions will determine ATP demand. ATP demand will be met by metabolizing a combination of two energy sources: fatty acids and glucose molecules(ignoring the small contribution of protein for now). As ATP demand increases, the rate of glucose flux through glycolytic pathway increases. Therefore at high workloads within the single fiber, the rate of pyruvic acid production will be very high. If the muscle fiber has a lot of mitochondria (and therefore more Pyruvate Dehydrogenase), pyruvate will tend to be converted to Acetyl CoA and move into the mitochondria, with relatively little lactate production. Additionally, fatty acid metabolism will account for a higher percentage of the ATP need. Fat metabolism does not produce lactate, ever! If lactate is produced from glucose breakdown, it will tend to diffuse from the area of high concentration inside the muscle cell to lower concentration out of the muscle fiber and into extracellular fluid, then into the capillaries.

The Whole Muscle at Work
Now let's look at an entire muscle, say the vastus lateralis of the quadriceps group during cycling. At a low workload, glycolytic flux is low and the pyruvate produced is primarily shuttled into the mitochondria for oxidative breakdown. Since the workload is low, primarily slow twitch fibers are active. These fibers have high mitochondrial volume. As workload increases, more fibers are recruited and recruited fibers have higher duty cycles. Now ATP demand has increased in the previously active fibers, resulting in higher rates of pyruvic acid production. A greater proportion of this now is converted to lactic acid rather than entering the mitochondria, due to competition between LDH and PDH. Meanwhile, some Fast twitch motor units are starting to be recruited. This will add to the lactate efflux from the muscle due to the lower mitochondrial volume of these fibers. The rate of lactate appearance in the blood stream increases.

The Body at Work
The vastus is just one of several muscles that are very active in cycling. With increasing intensity, increased muscle mass is called on to meet the force production requirements. All of these muscles are contributing more or less lactic acid to the extracellular space and blood volume, depending on their fiber type composition, training status and activity level. However, the body is not just producing lactate, but also consuming it. The heart, the liver, the kidneys and inactive muscles are all locations where lactic acid can be taken up from the blood and either converted back to pyruvic acid and metabolized in the mitochondria or used as a building block to resynthesize glucose (the liver). These sites have low intracellular lactate concentration, so lactic acid diffuses INTO these cells from the circulatory system. If the rate of uptake or dissappearance of lactate equals the rate of production or appearance in the blood, then blood lactate concentration stays constant (or nearly so). When the rate of lactate production exceeds the rate of disappearance, lactic acid accumulates in the blood volume, then we see the ONSET of BLOOD LACTATE ACCUMULATION (OBLA). This is the "Lactate Threshold" (LT).

Performance Implications
Lactic Acid production is not all bad. If we could not produce lactate, our ability to perform brief high intensity exercise would be almost eliminated. However, As I am sure you are aware, lactic acid is the demon of the endurance athlete. Cellular accumulation of the protons (increased acidity) that dissociate from lactate results in inhibition of muscle contraction. Blame those heavy legs on the protons! The bottom line is that exercise intensities above the OBLA point can only be sustained for a few minutes to perhaps one hour depending on how high the workload is above the intensity at OBLA. Exercise at or below this intensity may be sustainable for hours. The causes of fatigue at these sub-LT intensities include carbohydrate depletion and dehydration. 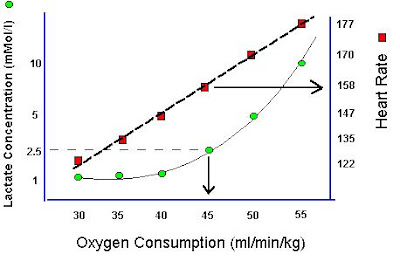 Fiber Type Composition- Slow twitch fibers produce less lactate at a given workload than fast twitch fibers, independent of training status.
Distribution of Workload - A large muscle mass working at a moderate intensity will develop less lactate than a small muscle mass working at a high intensity. For example, the rower must learn to effectively distribute force development among the muscles of the legs back and arms, rather than focusing all of the load on the legs, or the upper body.

Rate of Blood Lactate Clearance- With training, blood flow to organs such as the liver and kidneys decreases less at any given exercise workload, due to decreased sympathetic stimulation. This results in increaed lactate removal from the circulatory sytem by these organs.

Measuring the Lactate Threshold
We have previously discussed the value of a high maximal oxygen consumption for the endurance athlete. A big VO2 max sets the ceiling for our sustainable work rate. It is a measure of the size of our performance engine. However, the Lactate Threshold greatly influences the actual percentage of that engine power that can be used continuously.

Most of you will never have this measured in a laboratory, but a brief description of a lactate threshold test is still useful, because it will lead us into some specific applications for your racing and training. The test consists of sucessive stages of exercise on a treadmill, bicycle ergometer, swimming flume, rowing machine etc. Initially the exercise intensity is about 50- 60% of the VO2 max. Each stage generally lasts about 5 minutes. Near the end of each stage, heart rate is recorded, oxygen consumption is measured, and a sample of blood is withdrawn, using a needle prick of the finger or earlobe. Using special instrumentation, blood lactate concentration can be determined during the test. After these measurements, the workload is increased and the steps repeated. Through a 6 stage test, we would expect to achieve a distribution of intensities that are below, at , and above the intensity of OBLA or the lactate threshold. The data from a test would generally look simililar to the example below.

Interpreting the Data
For purposes of interpretation, let's say that the athlete above had a maximal heart rate of 182, and a VO2 max or 61 ml/min/kg. These were also determined using a bicycle test. So they are good values for comparison. Looking at the green dots, we see that blood lactate concentration does not begins to increase until during the 4th workload,from a concentration of abouu 1 mM to 2.5 mM. This is the break point. The subjects VO2 was 45 ml/min/kg at this point. So we determine that his LT occurs at 45/61 or about 74% of VO2 max. If we look at the heart rate at this point, it is 158. Now we have a heart rate at lactate threshold. 158 = about 85% of his max heart rate. This is useful for the athlete. When he is cycling, he can judge his training intensities based on this important value. If he is a time trialist, this would approximate his racing heart rate for the hour long event.

So, Do I race at My LT Intensity?
This depends on your race duration. If your are rowing 2000 meters, running a 5k race etc., your exercise intensity will be well above the AT. Consequently, the blood lactate measured after these events is extremely high in elite athletes, on the order of 15mM (resting levels are below 1 mM). In races lasting from 30 minutes to 1 hour, well trained athletes also perform at an intensity above LT, but by a smaller margin. It appears that in these events, top performers achieve what might be termed a "maximal lactate steady state". Blood lactate may increase to 8 to 10 mM within minutes, and then stabilize for the race duration. A high but stable lactate concentration may seem to contradict the idea of the LT. But, remember that blood lactate concentration is the consequence of both production and clearance. It seems likely that at these higher lactate concentrations, uptake by non-working muscles is optimized. At any rate, measurements in cyclists, runners and skiers demonstrate the fact that elite performers can sustain work levels substantially above the LT for up to one hour.

Specificity of the Lactate Threshold
It is important to know that the lactate threshold is highly specific to the exercise task. So if this cyclist tries to get on his brand new, previously unused, rowing machine and row at a heart rate of 158, he will quickly become fatigued. Rowing employs different muscles and neuromuscular patterns. Since these muscles are less trained, the cyclist's rowing LT will be considerably lower. This specificity is an important concept to understand when using heart rate as a guide in "cross training activities", as well as for the multi-event athlete.

Effect of Training
For reasons mentioned above, training results in a decrease in lactate production at any given exercise intensity. Untrained individuals usually reach the LT at about 60% of VO2 max. With training, LT can increase from 60% to above 70% or even higher. Elite endurance athletes and top masters athletes typically have LTs at or above 80% of VO2 max. Values approaching 90% have been reported. The lactate threshold is both responsive to training and influenced by genetics.