Understanding Rowing Technique - The Timing of the Catch

Understanding Rowing Technique - The Timing of the Catch
From Rowing & Regatta Magazine, & www.precisionsport.co.uk
By Dr Valery Kleshnev and Tim Baker

--------------------------------
The timing of the catch is a critical part of the rowing stroke which makes a significant difference to boat speed. The majority of rowers and coaches appreciate this and spend a lot of time working on it, yet what exactly rowers should be aiming for still seems somewhat shrouded in mystery.

To illustrate my point, I spoke to some coaches. “What is back-splash and is it a good thing?” I asked. “When should you place the catch?” There was little agreement about whether back-splash was towards the stern or the bow and certainly no agreement about whether it was a good thing or not. In fact the only common response was that “It’s a question that seems to create an awful lot of confusion.”

The timing of the catch is not a black art, but hopefully it is something that can be explained and understood. The aim of this article is to explain the basics and then discuss a subtlety that I believe may be the root of some of the confusion. 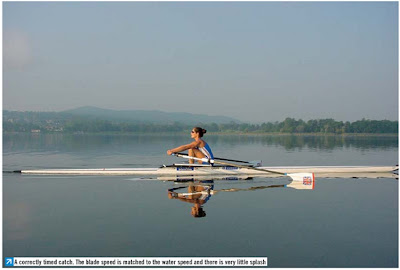 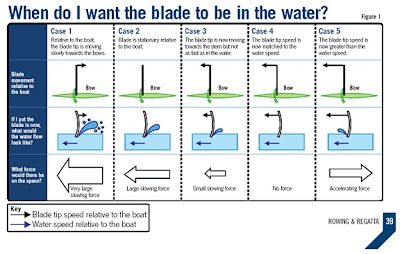 What happens if the blade is placed late?
A blade that is covered significantly after it has reached water speed will increase the catch slip. That is, it will reduce the effective stroke length. Put another way, the same effective stroke could have been achieved with a shorter overall stroke length and hence less wasted energy on relative movement between the boat and the rower.

What happens if the blade is placed early?
Placing the blade early will lead to a negative force on the handle. This should be avoided and could cause injury if done at high boat speeds or rating (more on this later). These two opposing factors – wasted effective stroke length versus check on the boat – are what makes the catch so critical in maximising boat speed.

It also takes time from when the blade first touches the water to when it is fully covered. Typically this takes around 0.1 seconds. Any time taken from when you start to raise the hands to when the blade first touches can be compensated for by simply starting to raise the hands earlier. However, it is important to minimise the time taken to cover the blade as this has a direct effect on effective stroke length.

Is it enough to let the blade fall under gravity?
If you raise the hands quickly enough that you allow the blade to fall under gravity, the acceleration is around 240 deg/s/s and this typically leads to a time to cover of 0.09 seconds. Club rowers are often slower than this. That is, they are still applying some downward force onto the blade as they allow the handle to rise, typically leading to a time to cover of around 0.13 seconds. Top-level rowers are achieving accelerations greater than gravity. Typically 300-400 deg/s/s at high ratings which lead to times to cover as low as 0.06 seconds. This reduced time to cover the blade is significant and can only be achieved by applying an upward force on the handle with the thumb. More detailed information on this is available at http://www.precisionsport.co.uk/

So how do we time the catch?
It usually takes longer to make the vertical movement (0.25 seconds) than to accelerate the blade to boat speed (0.15 seconds) so you need to start raising the hands on the way forward in order to put the blade in at case 4 (typically 0.1 seconds before the horizontal direction change).

How do we know when we’ve got it right?
There will be very little splash initially because the blade entry is timed to coincide with the blade speed matching the water speed. This is followed by a larger splash towards the stern as the blade starts to go faster than the water and the blade force builds.

FINESSE
We are now going to talk about some subtleties, so don’t let anything said here confuse you about the basics which still apply. Ideally you would want the blade fully covered at case 4, but this is not possible. To do this would mean that the first touch of the blade occurred when the blade was going too slowly and there would be a significant check on the boat. If, instead, you time it such that the blade has reached water speed before any of it touches the water, you have missed the first few degrees of the stroke. What the top rowers do (from bservation and measured data), is a compromise between these two. Typically the blade entry is timed so that the blade matches the water speed when it’s around 50 per cent covered. That is, if the blade takes 8/100ths of a second to cover, then the first touch is about 4/100ths second early. Figure 2 shows this on a blade path shape where the magenta circle shows the point at which the blade matches water speed. This timing allows the rower to ‘sneak’ a few extra degrees of effective stroke.

Why do we get away with this?
• It is only a very small speed mismatch.
• It only occurs for a very small time (3-4/100ths of a second).
• The rower doesn’t resist the blade handle.
When the blade first touches, there is a mismatch in speed but only a few centimetres of the blade are in the water so the handle force is very small. As the blade becomes more covered, the speed mismatch reduces until when the blade is 50 per cent covered the speeds are matched. The force is related to the speed difference and the area of blade in the water is always small. If the rower was to resist the negative force on the handle via the footplate then it would decelerate the combined system of boat and rower. (The same as if you hold the boat up.)

Instead what happens is the rower allows the handle to accelerate them towards the bow of the boat so the combined system of boat and rower is not slowed. In fact it happens so quickly that you don’t really notice it. Visit www.precisionsport.co.uk to find out more.

What are the key points?
• The splash towards the bow is not the thing to aim for. You are aiming to get the blade in as soon as is possible, which is done by practice and ‘feel’. This (very small) splash is a consequence, not the desired effect.
• The blade should never touch the water on the way forward (case 1).
• The blade should never touch the water when it has reached its furthest forward (case 2).
• What we are talking about here is placing the blade after it has changed direction and started to move towards the stern. The blade is almost matched to the speed of the water before first touch and the mismatch only occurs for a few 1/100ths of a second.

I believe that some of this concept may have filtered down from top-level to club rowing and has been misunderstood such that people believe that a back-splash is a positive thing to be aiming for. Some coaches appear even to teach a large back-splash to encourage maximum forward placement which is not a sensible thing to do. You must match the blade speed to the speed of the boat at blade entry.

Use a high vertical acceleration on the handle to minimise the time to cover the blade.
• Start raising the hands on the way forward since it takes longer to make the vertical movement than to accelerate the blade to water speed.
• Time the blade entry to coincide with when the blade matches the water speed.
• There should be little or no splash initially – do not aim for a large back-splash.

ABOUT THE WRITERS
Dr Valery Kleshnev is recognised as a world expert in rowing bio-mechanics and provides technical analysis to
Jürgen Grobler and the GB team.
Tim Baker studied engineering at Cambridge University and then worked for Rolls-Royce designing civil jet engines before setting up Precision Sport Rowing Electronics in 2003.