BENEFITS OF FREE-WEIGHT EXERCISES:
Ground-based, free-weight exercises, such as the Weightlifting lifts (i.e. cleans, snatches, & pulls), squats, presses and their derivations, are multi-joint activities executed while standing that stress the vital action/reaction principles so important in sports (1). Free-weight exercises can offer higher metabolic demands, and greater stabilization, coordination and balance when compared to machines (2,3,4). Machines tend to eliminate the need for stabilization, coordination and balance since they are usually designed to train muscles rather than movements thus reducing the metabolic demand. Machines operate in fixed movement patterns that don’t conform to the athlete’s individual range of motion, but rather, conforms the athlete to the machine’s range of motion (3,5).Training in a fixed axis with partial movements eliminates total body involvement and drastically reduces synergistic development.

It can take a great amount of practice to become proficient with free-weight exercises such as power cleans, squats, and presses. Although machines can and do play an important auxiliary role, anybody can walk off the street and
perform a leg curl. This is where the strength and conditioning professional steps in. If you are to adequately develop as an athlete you must train as you’re going to compete.

Training as we compete is the key. Most sports require the athlete to perform explosively. Rapid displays of speed, quickness, agility, power and strength is necessary for sporting success (6, 13). These displays are executed in
coordinated, full-body actions. One must condition the body to meet such demands. Free-weights allow the athlete train in such a manner. Further information regarding explosive training can be found at coachesinfo.com.

Some coaches cite safety as a concern in choosing machines over free weights. The goal should be to prepare the athlete so that they are less susceptible to injury in the competitive arena not the weight room. How will the athlete be better prepared to meet the demands of the game if conditioning is not similar? The answer is they won’t be. Safety is definitely a concern though. Proper care must be taken when selecting equipment, facility layout, staffing, and exercise instruction.

THE LIFTS:
We feel the following five exercises, and their various derivations, are important in the development of our athletes. This list is by no means exhaustive; there are many other exercises that we will include in our training routines throughout the year as well.

THE WEIGHTLIFTING LIFTS:
The weightlifting movements (clean, snatch and their derivatives) are ground-based exercises that require total body involvement from a standing position. They stress the ground-based action/reaction principles of most sports. The lifts utilize triple extension (hips, legs, and ankles) very similar to sprinting, jumping, and other athletic movements. 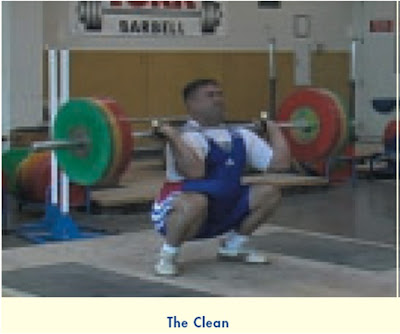 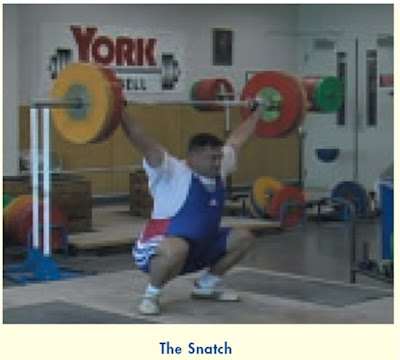 As a strength coach, exercises should be selected based upon athletic movement patterns, not just muscle groups (7). The power production potential these lifts offer are unequaled by most other forms of strength training (8, 13). They also require high levels of timing, coordination, flexibility and balance with each repetition. In other words, they require a fair amount of athleticism to be performed correctly. These lifts (along with squats) are the core of our programs. The athlete must act explosively in order to be successful at them. The athlete will become accustomed to not only imparting force but receiving it as well. The derivatives of the clean and snatch include cleans, power cleans, clean pulls, snatches, power snatches and snatch pulls from various starting positions. Emphasis must be placed on the importance of technique in the execution of these lifts. It is imperative for attaining the benefits and for safety that instruction is sought from qualified individuals.
SQUATS:
The squat is considered by many coaches to be essential for the overall physical and athletic development of both male and female athletes (7,9,10,11). The benefits derived from squatting include increased ligament and tendon strength and bone density (3,10,12); increased development, strength, speed and power of the lower back, hip and knee musculature (3, 10); as well as an improved neuromuscular efficiency (3,10).Variations of the squat include the back squat, front squat, overhead squat and 1-leg squat. 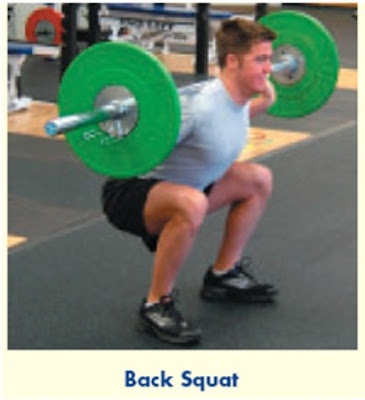 THE ROMANIAN OR STIFF-LEG DEADLIFT:
The Romanian or stiff-leg deadlift is another ground-based exercise that is an integral part of our program. It is effective in developing the posterior chain muscles. The most involved of these are the spinal erectors and hamstrings. It is our observation that a majority of hamstring injuries occur near the upper portion or origin of the hamstrings. This also appears to be the area where most of the stress is focused during the execution of the Romanian or stiff-leg deadlift. It can help reduce the chance of injury by strengthening the hamstring in a stretched position which appears to be the position in which most injuries occur.

This lift also plays an assistive role for the weightlifting movements by strengthening the pull. It can be executed with clean or snatch grips and on one leg. 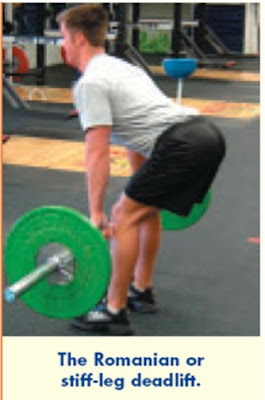 THE MILITARY OR SHOULDER PRESS:
The military or shoulder press is an excellent upper body developer. This development includes the entire shoulder girdle, arms and upper back. This exercise is best while standing for entire body involvement. Other variations include push press, jerks, and dumbbell work. 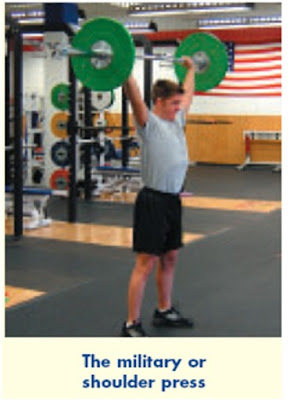 THE PULL-UP
The pull-up is another effective upper body exercise. The pull-up tends to be a challenging exercise for many athletes, which is another reason for its inclusion. We often have our athletes execute this exercise with additional weight in the form of a weighted vest or weight connected to a belt as well as a variety of different grips. The pull-up is also an effective developer of grip strength. 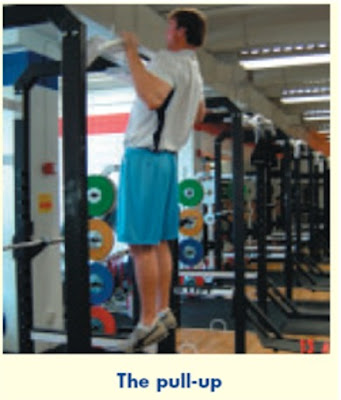