The Importance of Training Volume

Training – The Importance of Training Volume for Elite Rowing Performance
From Filipe Salbany
======================
Nothing will have a bigger impact on an individual’s chances of achieving an elite level of rowing performance than following a well-designed training program. Only through appropriate training can aspiring rowers develop the outstanding levels of conditioning and technique necessary for success at an elite level. However, it is a major challenge to understand the specific and often complex effects of a particular type of training on the body. Consequently, many “potential” elite rowers fail to make the transition from a national to an international standard because they adhered to a generalized training program that was not appropriately tailored to meet their individual needs. Coaches can avoid this situation by carefully examining the training practices of successful elite rowers and developing an understanding of how the body responds to different forms of training. In doing so, coaches should be able to create appropriate and individualized programs for their own athletes. Since the first challenge in preparing a training program is to decide the amount of actual rowing required each week, this article examines the relationship between weekly volume of rowing and the anticipated changes in physiology and performance.

Current training practice
Typically, elite rowers will cover in excess of 4300 miles of rowing per year (an average of 90+ miles/week) in addition to land based training [13]. The months of September and October are traditionally the starting points of the training year in the northern hemisphere. During this first part of the season, the primary aim is to increase the endurance capacity of the body. Training consists of specific (boat work) and non-specific activities (rowing ergometer, resistance work, flexibility, running, cycling etc…). Accordingly, the total amount of rowing during the first month(s) may be somewhat low to moderate (30-70 miles/week) in order to accommodate non-specific activities and allow the body a chance to re-adjust to the demands of training. Each week, total rowing distance can be progressively increased until the desired volume is achieved (see Figure). Predictably, the average exercise intensity of pre-season training should be low to moderate (mostly UT2 and UT1), which reduces the injury risk from overstress of muscles and connective tissue and give athletes a chance to concentrate on technique. More importantly, low intensity training enables athletes to complete a much higher volume of work than would otherwise be possible with higher intensity exercise [16]. Even several months into the season, the average intensity of training is still low, although some higher intensity work in the form of long intervals and head-races is often included. It should be recognized that while relative training intensity (i.e. % of max heart rate or blood lactate levels) remains low, the absolute intensity (i.e. boat speed) naturally increases with improvements in fitness and technical ability.
Classical training theory for rowing suggests that the volume of training should be greatest in the period preceding the main competitive season (December to May, see Figure) [1]. This strategy minimizes the potential for excessive volume to interfere with the quality of high intensity training later in the season. While the classical pattern of volume change is apparent in the seasonal training program of many elite rowers [1, 17], other factors such as climate, hours of daylight and participation in training camps often result in maximum training volumes occurring later in the season [3, 13]. Training intensity will be highest during the competitive season (June-September) although inevitably, the total volume of training, regardless of intensity, must be reduced towards the end of the season to allow athletes a period of full recovery before final competition.

Results from studies of elite rowers in Eastern Europe suggest that aerobic capacity does not appear to improve once annual training volume reaches ~3500 miles/year (~70 miles week). It should be noted that the vast majority of their training was performed at low relative intensities (UT2 and UT1). As mentioned earlier, increases in training volume necessarily reduce the overall exercise intensity. However, there is substantial scientific evidence to show that exercise intensity rather than volume is the primary factor that controls improvements in aerobic capacity [4, 6, 8, 10, 18]. The experience of elite Eastern European rowers also suggests that there is a limit to the benefit of increasing training volume for improving aerobic capacity. Collectively, it is reasonable to conclude that maximum aerobic fitness can only be achieved through the appropriate use of strenuous high-intensity interval sessions. Why then might the high volumes of low intensity training currently performed by elite rowers provide benefits in terms of the physiological requirements for success over 2000-m?

The primary effect of high volume training on the body is to increase the endurance capacity of the muscles. Large quantities of distance training alter the function and structure of the muscles recruited during the rowing stroke in a variety of ways, too numerous to list, but all linked by a common theme: High volume training improves the ability of muscles to store and use energy efficiently.
Most coaches and rowers now recognize the importance of the body’s carbohydrate levels on endurance capacity. Although the exercising muscles can use both fat and carbohydrate as a fuel source, only carbohydrate can supply energy fast enough to allow rowers to work at anything above low intensity rowing. In the absence of dehydration and/or high ambient temperatures, the failure to continue moderate intensity exercise is most frequently due to an exhaustion of available carbohydrate stores. Additionally, the ability to perform high intensity interval training is severely reduced if carbohydrate stores are low [14]. Fortunately, muscles respond to high volume training by:
Increasing the capacity to store carbohydrate
Preferentially increasing the relative contribution of fat as a fuel source during exercise.

While the adaptations that occur with high volume training are responsible for significant improvements in endurance capacity, they do little to directly improve aerobic capacity. Nevertheless, the changes described above will enable rowers to train harder, longer and more frequently. Since exercise intensity is the critical stimulus for maximizing improvements in aerobic capacity, an improved endurance capacity will increase the ability of rowers to sustain high intensity exercise during strenuous interval sessions, thus ensuring that the body receives the maximum possible stimulus for adaptation. Therefore, the gains that can be made in aerobic capacity later in the season will largely depend upon the extent to which muscular endurance capacity was developed in the early months of training. This same line of reasoning can be extended to include other physiological components necessary for success such as anaerobic capacity.

How much volume is necessary?

Presently, the available scientific evidence does not indicate the precise range in average weekly volume that should be performed at each training phase. Additionally, it is difficult to obtain a clear picture of the benefits of elite training patterns since many successful coaches prefer to remain secretive about the specific details of their training schedules. However, German scientists have reported that, as a general rule, their rowers no longer perform the extremely high volumes of specific rowing training that were common in the past (>120 miles/week) [15]. Instead, more time is now dedicated to non-specific training activities. More recent reports on the training practices of elite Norwegian and Italian rowers reveal a more reasonable average of ~100 miles/week, with a range of between 60 and 130 miles in any given week. A similar trend toward lower overall training volumes in recent years has been reported for elite cyclists and distance runners [9, 12].

In contrast to rowing, there is a substantial amount of information available on the training practices of the world’s best distance runners. While many elite distance runners are able to compete successfully on comparatively low training volumes (approximately 40-60 miles/week) [11], several expert coaches and scientists believe that the ultimate level of competitive performance achieved with such training will be restricted [7]. Measurable improvements in the physiology of distance runners using available scientific techniques (e.g., aerobic capacity and lactate threshold tests, muscle biopsies etc.,) appear to plateau at a weekly volume of around 80-90 miles [2]. Higher volumes of running than these are often justified through subtle but important enhancements in running economy/efficiency that are potentially too small for scientific tests to detect.
Based on the limited data available for rowers, it appears reasonable to suggest that the “apparent” maximum and direct physiological benefits of rowing training occur at a volume of between 70 and 100 miles/week. Nevertheless, the experience of today’s top rowers suggests that it is possible to perform even greater volumes of training without any obvious deterioration in long term rowing performance. As discussed above, this may be due to the importance of developing a superior endurance capacity for performing high intensity training later in the season. On the other hand, the true benefit of high volume training may have more to do with technical, rather than physiological changes.
One of the major differences between rowing and other endurance sports such as cycling and running is the importance of higher levels of technical skill in rowing to ensure optimal transfer of energy into boat movement. Potentially, high volume training enhances the efficiency of the rowing stroke. Certainly, improvements in efficiency during simulated rowing exercise have been shown to occur in response to additional years of training in American oarsmen [5]. While improvements in stroke efficiency of an individual are probably due to better posture, blade work and coordination between muscle groups, there is also evidence emerging to show that the manner in which the brain activates individual fibers responds favorably to extensive endurance training. Additional research is needed before high volume training can be justified based on improvements in stroke technique and efficiency.
There are various other possible reasons why high volume training is important for rowing performance. It may be that this type of training particularly helps increase focus and determination in athletes. Additionally, lightweight rowers will benefit from the increased energy expenditure that will help control body fat levels. However, unaccustomed and rapid increases in training volume will inevitably result in illness, injury and reduced performance. Coaches must weigh up the potential benefits of high volume training with an athlete’s training history, ability and goals. Additionally, coaches need to resist the temptation to continually prescribe higher and higher annual training volumes. There is an obvious upper limit to the advantages of increasing total volume. Eventually, sustained high volumes will lead to stagnation of performance and overtraining. In order to provide athletes with the greatest possible chance of success, coaches must first develop a comprehensive understanding of the effects of training and decide on the most appropriate course of action for each individual. 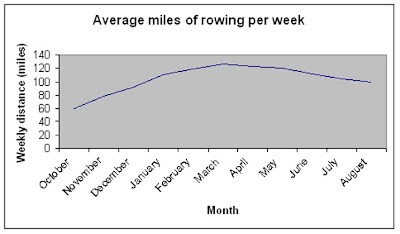