Subsequent to repeated bouts of exercise in a hot environment, there is a marked improvement in the physiologic responses of healthy humans. This improved tolerance to exercise in heat is known as heat acclimatization. When accomplished in an artificially controlled environmental chamber, this process is known as heat acclimation. The primary benefit of heat acclimatization is improved tolerance of exercise in the heat, evident as a reduction of the incidence or severity of symptoms of heat illness, and increased work output concurrent with reduced cardiovascular, thermal, and metabolic strain.

Physiological Responses
Heat acclimatization is specific to the stress imposed on the human body. For example, passive exposure to heat induces some responses, notably an improved ability to dissipate heat. In contrast, physical training in a cool-dry environment results in metabolic, biochemical, hematologic, and cardiovascular adaptations. Heat acclimatization via strenuous exercise induces responses attributed to both passive heat exposure and training in cool environments. Table 1 illustrates these relationships.

Complete heat acclimatization requires up to 14 days, but the systems of the body adapt to heat exposure at varying rates. The early adaptations (initial 1-5 days) involve an improved control of cardiovascular function, including expanded plasma volume, reduced heart rate, and autonomic nervous system habituation which redirects cardiac output to skin capillary beds and active muscle. Plasma volume expansion resulting from increased plasma proteins and increased sodium chloride
retention, ranges from +3 to +27%, and is accompanied by a 15-25% decrease in heart rate. This reduction of cardiovascular strain reduces rating of perceived exertion, which is proportional to central cardiorespiratory stress, also decreases during the first five days of exercise-heat exposure. Plasma volume expansion is a temporary phenomenon, which decays during the 8th to 14th days of heat acclimatization (as do fluid-regulatory hormone responses, see below), and then is replaced by a longer lasting reduction in skin blood flow that serves to increase central blood volume.

The regulation of body temperature during exercise in the heat is critical, because of the great potential for lethal hyperthermia. Thermoregulatory adaptations (i.e., increased sweat rate, earlier onset of sweat production), coupled with cardiovascular adjustments, result in a decreased central body temperature. This response is maximized after 5 to 8 days of heat acclimatization. However, the adaptations of eccrine sweat glands are different during humid and dry heat exposures. Heat acclimatization performed in a hot-humid condition stimulates a greater sweat rate than heat acclimatization in a hot-dry environment. Also, the absolute rate of sweating influences thermoregulation. If hourly sweat rate is small (<400-600>45 yr) were shown to have higher heart rates, higher rectal temperatures, and lower sweat rates than young men, during exercise in the heat, both before and during exercise in the heat, both before and after heat acclimatization. Similarly, studies conducted in the late 1960s suggested that women were less tolerant of exercise in a hot environment than men.

However, recent research has qualified and/or reversed these viewpoints. It is now recognized that few gender-related differences exist, when female and male subjects are matched for pertinent physical and morphological characteristics. It is also recognized that differences between older and younger subjects are not necessarily due to aging per se, but may be due to other factors such as decreased training volume and lower maximal aerobic power (VO2max)

Most experts agree that intense physical training in a cool environment improves physiologic responses and speeds the process of heat acclimatization. During training in cool conditions, optimal physiologic adaptations may be achieved if strenuous interval training or continuous exercise, at an intensity above 50% of VO2max, is performed for 8-12 weeks. Maintenance of an elevated core body temperature appears to be the most important physiologic stimulus. 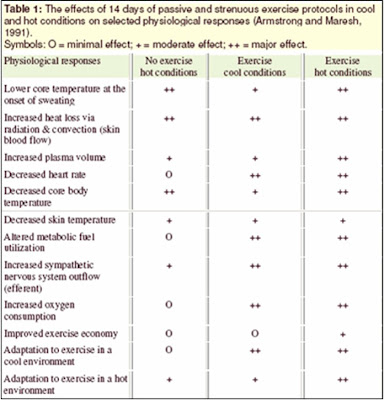 Irrespective of physical training, VO2max generally influences physiologic responses during the development of heat acclimatization. Individuals with a high VO2max (>60 ml.kg-1.min-1) exhibit superior heart rate and rectal temperature responses, and usually reach a stable heat acclimatization state faster, when compared to those with a low VO2max (<40>