Terminology and Differentiation of Training Methods

TERMINOLOGY AND DIFFERENTIATION OF TRAINING METHODS
By Dieter Steinhofer
www.athleticscoaching.ca
---------
In the following text, based on an abbreviated translation from Leistungssport, Germany, Vol. 26, No. 6, November 1993, the author attempts to improve communication between coaches and scientists by proposing a reconstruction of terminology to be adjusted to training principles and methods based on the required physical performance capacity. The article was originally reprinted from A Collection of European Sports Science Translations, published by the S.A. Sports Institute. Re-printed here with permission from Modern Athlete and Coach.

THE PROBLEM
Everybody interested in the science of training knows that there is a need for a dialogue between theory and practice. The frequent absence of communication between athletes, coaches and sports scientists has been the result of inaccurate terminology and sometimes even contradictions when it comes to the interpretation of training methods. The aim should therefore be to re-construct the methodical training principles, as well as training methods and their characteristics, so that they are based on the required physical capacities.

Such a differentiated new structure is necessary because literature dealing with training sciences refers all conditioning training into four or five basic methods. This allocation is no longer suitable for contemporary specialized training. The training required for all physical capacities is covered in the following basic methods:
The continuous method
The interval method
The repetition method
The competition and control method.

The aforementioned methods of endurance training were, without close examination, transferred to strength, speed, mobility etc. development. This took place even when the methods did not fit into the accepted practical evidence. At the same time the influences of certain training methods were wrongly evaluated, while others were overlooked because they simply didn’t fit into the system.

TRAINING METHODS AND THEIR LOAD COMPONENT
The ‘decisive’ factors of methodical training have multiple determinations. The decisive levels extend, among others, from the concept, the execution, the organization and the external and internal feedbacks of training to the evaluation and interpretation of it. At the same time the planned procedures to achieve the desired training effects are determined by the arrangement of the training contents and means based on the load components:
The load volume.
The load frequency.
The load intensity.
The load duration.
The load density.

These load components allow the determination of the volume, duration, intensity and recoveries for an exercise to be performed (see table 1). The load frequency refers here to daily, weekly and monthly periods and depends largely on an athlete’s training state and performance aims. 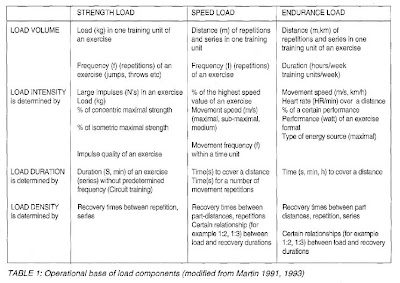 The continuous method is characterized by uninterrupted high volume loads with relatively limited load intensities. The extensive and intensive interval methods are based on a pre-planned alteration between loads and recoveries. The loads are adjusted according to the task. A high volume and medium intensity represents intensive interval training.

Decisive, next to the volume and intensity of the load, is the length of recoveries. In contrast to the repetition method, interval training proceeds from incomplete recoveries. The breaks are consciously adjusted to prevent a complete recovery in order to create fatigue.

The repetition method is also based on a pre-planned alteration of loads and recoveries. However, the aim is for complete or nearly complete recoveries between the repetitions (for example, heart rate <>


TRAINING METHODS IN PRACTICE
The division of training methods and their characteristics in the German sport science literature is certainly useful as a systematization attempt. On the other hand, it complicates concrete planning and conduction of training. Some of the following examples will verify this statement.

Endurance Training
A prerequisite for the use of a recommended load is its operational clarity. Load recommendations for the continuous method should therefore clarify their background. For example, what does “limited” or “60% to 80%” really mean? Is the load value based on the best competition performance, on maximal speed (m/s), on maximal heart rate (HR/min.), or on maximal watt performance? All these values are, according to the advice and the training aim, employable. Also the pd-values of Conconi, or lactate values, can be used in the determination of intensities. Whatever the chosen value, it will influence the other norms and together with these will have a training effect.

Interval Training
Difficulties in the determination of load norms apply more so to interval training. What do intensity recommendations mean here? Do the intensity recommendations apply to a single load or to a series of loads? How is the incomplete recovery to be interpreted? What differences apply to the determination of intensities for endurance, strength endurance or speed endurance development in interval training?

The situation is even more difficult in the determination of the load density. How is the incomplete recovery determined? The rule for medium and longer single loads in cyclic activities, that recommends a heart rate of 120 to 130/min. before a new load is applied, can only be valid for short anaerobic loads and never for strength endurance training.

The controversial statements on when the recoveries should be incomplete or complete correspond partly to the obviously confusing statements on training aims. In case interval training is supposed to achieve fatigue accumulation from incomplete recoveries, the aim of interval training should be regarded as the development of resistance to fatigue to improve endurance performance capacity.

Several sport scientists (example, Martin 1997, Letzelter 1978, Weiweck 1983, Letzelter 1986, Martin et al 1991), leaning on the theories of Scholich (1965) and Harre (1968), allocate interval training to the role of the development of speed, power, speed strength and explosive strength. However, a closer look at interval training defined as a method with incomplete recoveries in between single loads, reveals that the recoveries in capacities are in practice rather complete. Letzelter (1978) recommends in his “Intensive interval methods III” 3 to 50 minutes recoveries in the development of explosive strength. Obviously this crosses the border of the repetition method.

Repetition Training
The main problems in converting the information from the literature on load components for practical application occur in the repetition method. Firstly, it is assumed that this method, based on complete or nearly complete recoveries, has the function of avoiding an accumulation of fatigue, or at least delay it as long as possible. This makes it possible to achieve the training aims requiring high loads (for example, the development of speed, explosive strength, reactive strength, technique). Intensive loads can be repeated frequently after full recoveries. The duration of a full recovery cannot be presented in a time unit, because the recovery interval depends upon the previous load. A full recovery after a highly intensive load of a few seconds can be very short (1 to 2 min.), while a maximal load of 3 min. requires a lot longer for complete recovery (15 to 30 min.).

Information on recovery in time units is therefore not useful in practice. Even more confusing in the repetition method are the given intensity ranges (90 to 100%), sub-maximal, maximal. Whilst high intensities are certainly sensible and necessary for many training means, they can only be repeated after a sufficient recovery interval.

Furthermore, loads of considerably lower intensity in higher volumes also have a place in the repetition method (hypertrophy. coordination). For example, load intensities in hypertrophy training can, according to the aim, range from 50 to 80% in employment of a high number of repetitions and full recoveries between the sets.

In Summary: All training exercises performed with alternating loads and complete recoveries correspond to the principles of the repetition method. Extremely high intensities, sometimes regarded as belonging to this method, are unrealistic for certain tasks and therefore not practical. Intensive training exercises are not as decisive in the repetition method as complete recovery intervals in the prevention of fatigue accumulation.

ALTERNATE STRUCTURAL TENDENCIES
Recent sport science literature questions the here criticized traditional division and characteristics of training methods. Trends towards a different approach can already be found in Weineck’s work (1983) on training methods for the development of endurance, strength and speed. Martin (1991) writes: “The attempted simplification of the training doctrine that divides all methods into the continuous, interval, repetition, competition and control principles cannot be accepted, in view of the known practical possibilities and the number of components that make up a method.” We recommend as a possible solution to arrange training methods based only on their conditioning or coordinative foundation. Grosser et al have chosen a similar arrangement (table 2). 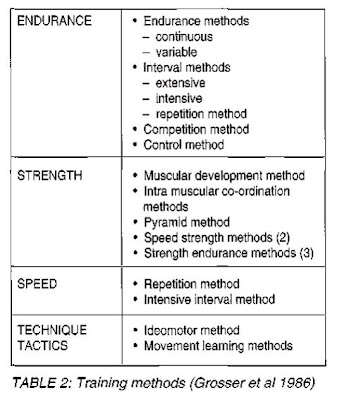 Both of the above outlined proposals of structural changes are not convincing for the following reasons:
-The terminology for the different methods is presented at the same comprehension level. The methodical principles (for example, interval and repetition methods) are mixed with concrete methodical measures (for example, strength endurance method, speed-strength method).

-The arrangement of the methods is questionable (for example, the repetition method as a substructure of the interval method).
-The objective is not always correct (for example, the use of intensive interval training for the development of speed).
-The terminology sometimes differs considerably for identifiable methods and is therefore misleading for practical application.

MODIFIED STRUCTURAL CONCEPT
It appears that, because training methods according to their task — development of strength, speed-strength or endurance, have different objectives, it is hardly sensible to arrange the methods based on their typical load components. The repetition method in strength training, for example, has a completely different objective than in endurance training and the load characteristics differ accordingly. From this it appears valid to proceed so that the methodical measures are orientated to practical objectives that are mostly of a complex nature.

The systematic arrangement of training methods in tables 3, 4, 5 can by no means cover the complex training procedures, although it provides an oversight of a large number of combinations and variations. Combined training procedures, mixed formats and modifications occur and become increasingly more important in high performance training. Consequently, the training methods summed up in the table represent only a selection for different training objectives.

The following are some explanatory remarks to the material presented in tables 3,4,5:
The use of the term interval principle can be justified only when we are dealing with endurance, including such complex capacities as strength endurance and speed endurance.
The aim is to accumulate fatigue from incomplete recoveries so that the accumulation does not force the reduction of the load volume.
The temporal classification of short, medium and long intervals loads are used with practical training application in mind. The longer the single interval loads, the less valid becomes the term interval because the training effect will be changed.
The concept of strength endurance is based closely on the definition of Buhrie (1985) and Martin et al. (1991) as the capacity to apply strength impulses in a certain time unit without a reduction of the impulse level. We are dealing with resistance to fatigue at an intensity level of 30% below the maximal. This level and duration of the load corresponds predominantly to the anaerobic lactacid energy supply. Longer and lower strength loads (less than 30% below the maximal) change training into endurance loads under increasing aerobic energy supply and can’t be regarded as strength endurance.
Speed endurance is defined as the capacity to keep speed losses minimal in short speed performances of less than 2 min. at maximal or sub-maximal intensity. Grosser (1991) separates 8 to 12 sec. speed performances (submaximal). Martin et al. defines up to 30 sec. maximal intensity performances as sprint endurance and up to 120 sec. sub-maximal intensity performances as speed endurance. We have for practical reasons, eliminated this division.
Decisive in speed endurance and its sub-classifications is the fact that we are dealing with frequency and high intensity endurance performances where the exact limiting factors are not unequivocally explained.
The repetition principle is suitable for several different conditioning training effects. However, it is assumed that the intensity in repetition training is not based exclusively on high and highest possible loads. 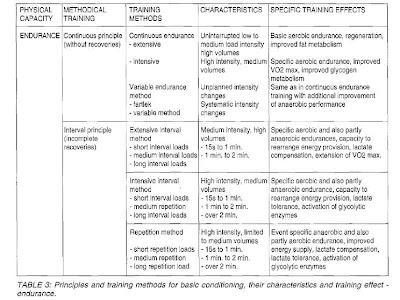 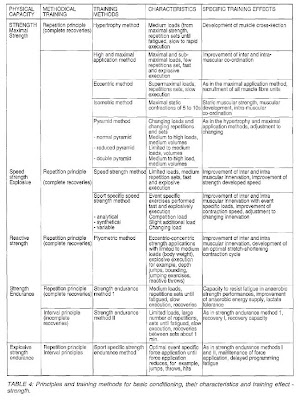 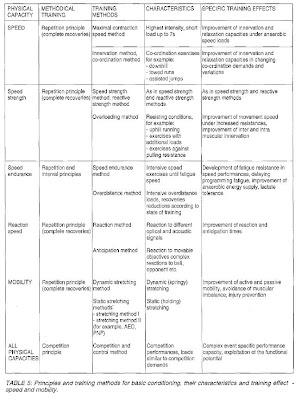