Force Application during the Drive Phase

Force Application during the Drive Phase
By Valery Kleshnev
Rowing Biomechanics Newsletter No2 Volume 4 February 2004
http://www.biorow.com/
--------------------------
… increasing the force faster at catch is very important for achieving efficient rowing technique? Below are force curves (as a ratio to body mass) of two crews, where the crew 1 increases the force much quicker than the crew 2, but crew 1 has relatively lower maximal (7.27 and 8.84 N/kg, correspondingly) and average (3.84 and 4.09 N/kg) force application:

It is also important, that the first crew increases the force by means of faster leg drive, good connection with the trunk work and more horizontal and shallower blade path: 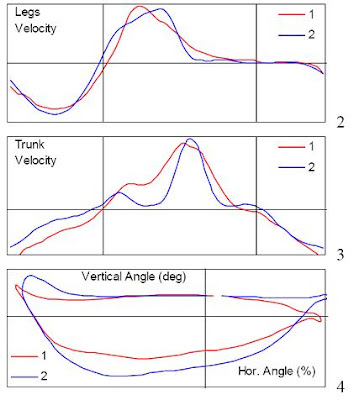 As the consequence, the handle velocity of the first crew increases at catch up to higher value and maintain it longer during the drive:

The boat speed and acceleration curves of the first crew have deeper negative peak at catch (7.6 and 7.1 m/s2), but much quicker increase afterwards. 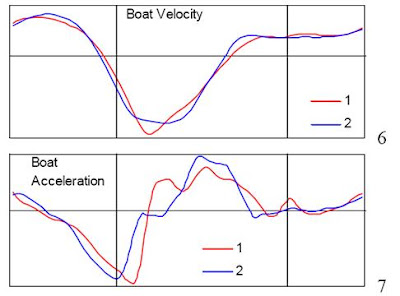 This creates faster moving support on the stretcher and helps to accelerate rower’s centre of mass (RBN 1/2004):

Finally, the overall gain due to better technique of the first crew was approximately 10s over 2000, which was nearly equal to the margin between two crews in the race.