Understanding of, and experience with long-term build-up programs for high performance female and male rowers - PART 1

The absolute levels of blood lactate achieved during maximal work in a race are influenced significantly by the rower’s aerobic capacity. Fig 7 shown a comparison of absolute lacate concentrations in the blod of rower(s) with high (curve 1) and poor (curves 2-4) aerobic capacities. As can be seen, blood lactate in rowers with poor aerobic capacity, increases early and steeply, reaches its maximum level during the race (curve 4) and cannot be elevated further at the finish of the race. 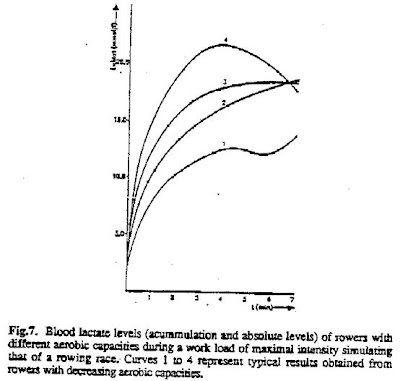 Early and high concentrations of lactate in muscles diminish their aerobic production of ATP within mitochondria (power plants of the cell), regeneration of creatine phosphate, glycolytic efficiency, contractibility, and neuromuscular coordination. Because of these biological relationships high concentrations of lactate limit strength endurance and coordinative abilities which are the performance determining conditional abilities in rowing.

The time dependent contributions of aerobic and anaerobic components to the overall energy supply is related closely to the course of performance and oxygen consumption. Thus, between the first 10 and 90 sec of a race i.e. when the physical output reached its highest level, the energy required is covered mainly anaerobically with a contribution of 78.9 at the 10 sec point and 46.8% at the 90sec elapse point. The corresponding oxygen consumptions at these two points are 42.8 and 88.7%, respectively. These percentages can be contrasted to the maximal oxygen consumption achieved at lower stages. The high oxygen deficit produced in the first stages of a race needs to be compensated by an equivalent supply of anaerobic energy.

Oxygen consumption reaches a relative steady state only after the second minute of a race. At this stage, the energy required for an almost constant physical output is covered 84% through aerobic means. However, it becomes clear from Figs 8 and 9 that the overall energy requirements generally exceeds the total energy capacity, and therefore are dependent on additional, continuous alactacidic or alactacidic energy supply.

Although the rower tries to exploit anaerobic capacity to its full extent during the final stages of a race, the remaining output derived from it is relatively small especially if the demand for anaerobic energy was high during the start phase.

Fig 10 shows the relative contribution of each energy component to the total energy supplied during the race. The columns represent the situation at the end of successive time periods during a race and hence show the change in relative importance of the different energy components depending on the length of a rowing event. Time periods were 0-20, 0-90 sec, 0-4, 0-6 and 0-7 min (racing time in a rowing event) 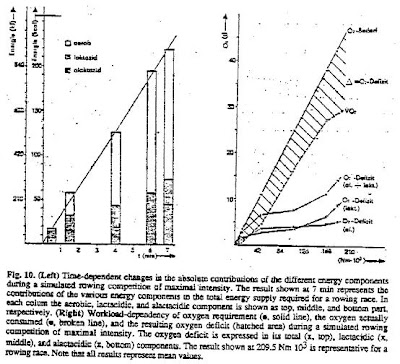 For an event of 7 min duration (corresponding to a 2000m race), the total energy requirement average 70% aerobic and 30% anaerobic. The aerobic portion is compromised of 10% lactic and 20% alactic energy supply. The aerobic and alactacidic energy supply together contribute about 90% of all performance determining, physiological components. Considering quantitative aspects, these tow components must be the main determining factors for competition (Fig 11)
To logically deduct adequate training methods in an aim oriented manner, knowledge of the temporal changes of contributing energy components to the overall energy supply of a competitive workout is needed. In addition, their relative contribution must be considered to develop all biological systems involved. 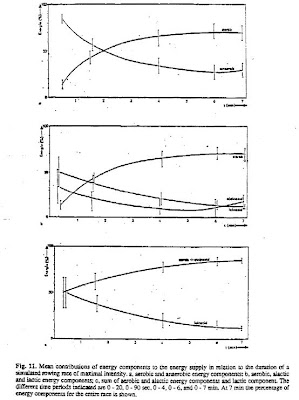